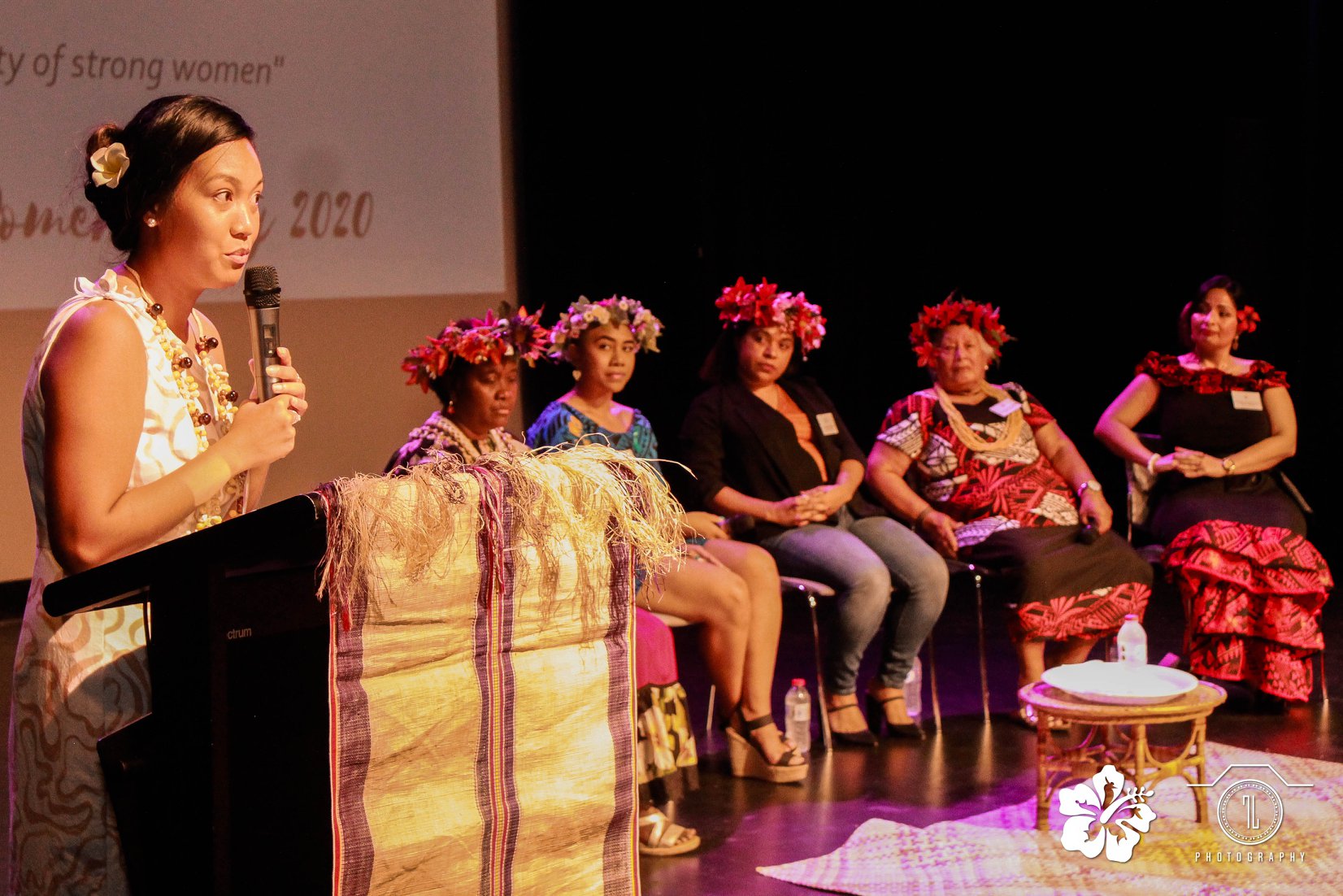 The Pasifika Women’s Alliance is a non-political, nonsectarian, not-for-profit culturally diverse network consisting of women who have migrated to Australia from 22 Pacific Island countries and territories. The alliance seeks to build and strengthen a Queensland sisterhood of Pacific Islander women and to raise the awareness of members as to their rights and responsibilities as citizens and encourages their participation in all aspects of community life.

The objectives of PWA include:

The management of PWA has always been lead community members on a volunteer basis and our PWA AGM 2021/22 saw the following women elected as the PWA Board 2022. 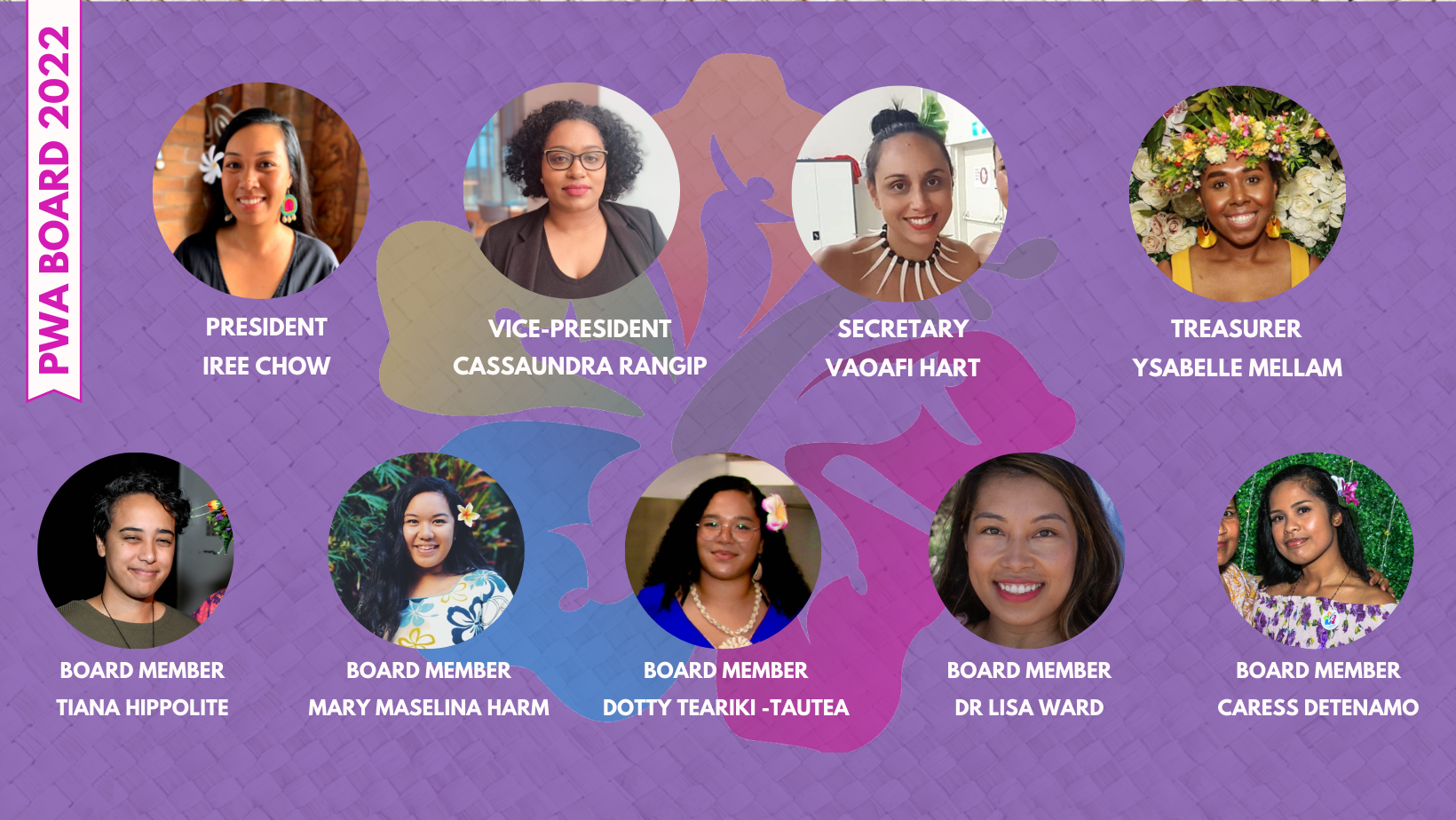 We take this opportunity to thank the outgoing PWA board and sub-committee members for the contributions made to make 2020 another successful year for PWA. We reflect on the great achievements as well as all the learning opportunities that have been presented to assist us in building more engaged, interconnected and flourishing communities through supporting our women.

We look forward to serving our communities in 2022!

With a background in accounting and finance, Iree has had the opportunity to utilize her skills across several roles and projects – allowing her to spend her time traveling in between Honiara, Solomon Islands and Brisbane, Australia. As a Chuukese (Federated States of Micronesia) and Chinese-Solomon Islander residing in Brisbane, she stays connected to her cultures by serving in spaces that allow her to give back to her communities and empower women and youth to work together to address the issues and challenges most prevalent to our Pacific Islands. During her studies at the Queensland University of Technology she Co-founded the QUT Pasifika Student Association (QUTPA), sitting as the first President and remains an active member of the Pacific Islands Council of QLD, Pasifika Young People’s Wellbeing Network, Solomon Islands Brisbane Community and Pacific Climate Warriors Brisbane Team. Having sat on the PWA Committee & Board since 2015, it is an honour for Iree to step into the role of President for another term in 2022.

Cass has an educational background in a Bachelor of Laws and International Business completed at Queensland University of Technology and University of New England respectively. She is the Managing Director and Founder of Pacific Fashion Festival with extensive experience in Industrial Relations, Workplace Investigations and Compliance and small business consultancy. She has helped hundreds of small businesses with their employee and operational issues. She is now currently a business owner that owns online stores on third party online platforms. Her passions are equal opportunity, shining a light on the issues of domestic and family violence and creating large scale high impact platforms. Whilst also being a mother of one beautiful daughter with a busy schedule, Cass has created extensive community impact initiatives as the co-founder of The Leniata Legacy, which involved Brisbane’s first street protest march against Gender-Based Violence in PNG through partnering with Amnesty International.

Vaoafi is a proud Samoan hailing from the villages of Salelologa and Falevao and Wellington, New Zealand. She has an extensive background in defence and training and works professionally as a Training Specialist and assisting Australian Defence Force COVID Taskforce as a reservist. Vaoafi is currently studying Robotic Process Automation with Australian Army and keen to learn more about data protection and privacy. She has a passion to assist people from the Pacific region to look into defence and emerging technology as a field of employment.

Mary Maselina Harm is a proud Samoan/Chinese-Fijian born in Canada and raised on Turrbal country, Brisbane, Australia. She is the eldest daughter of the eldest daughter and was named after the matriarchs on both sides of her family. Passionate about the power of storytelling in creating social change, Mary enjoys working in multidisciplinary spaces, in particular with young people, to co-design initiatives and projects that are of value to them and their communities. During her university days, Mary played a key role in establishing the University of Queensland’s South Pacific Islander Association (UQSPIA) and was elected the first female president of the Asia Pacific Youth Parliament for Water (APYPW) in South Korea. Mary continues to serve community in several capacities, but most notably as the QLD Multicultural Youth Ambassador under MYAN (Multicultural Youth Advocacy Network) and the QLD Coordinator for a group of young community leaders known as the Pacific Climate Warriors. It has been this work, at the grassroots, that has informed how Mary meaningfully engages and mobilises community.

Lisa studied Bachelor of Medicine and Surgery at the University of Auckland, New Zealand and is completing her dual speciality training in Endocrinology and General Medicine in Queensland. Presently she works at the Gold Coast University Hospital as the Chief medical registrar. Her passions include mentoring, women’s health and humanitarian work. She is an active member of Oceania Pacific Health Association, Australian Diabetes Society and Endocrine Society of Australia. She is thrilled to be on the PWA board for the upcoming year.

Kia ora! Tiana is scientifically trained with a B. of Biomedical Science and currently completing a M. of Medical Research with a focus on cancer diagnosis while working at Griffith University as the Pacific Engagement Officer to raise career aspirations and demystifying the misconceptions of higher education. She also co-founded and was the first president of the Griffith Pasifika Association – Gold Coast (GPAGC). Don’t let those weird words throw you off though, she is always ready to laugh and often just wonders if birds get jetlag. Her passion is helping others through creating positive experiences and encouraging and supporting young people. In all her work within this space, she draws on her experiences as a young woman struggling with identity and reconnecting with her culture. Through her journey, she came across a saying that best describes her approach to this work: “Whiria te tāngata” – weave the people together.

Hailing from the Takuu Atoll (Mortlock Islands) on the Polynesian outlier and the province of Milne Bay in Papua New Guinea. Dotty is currently studying towards her bachelor’s in psychology. She is passionate about connecting the community to their heritage and culture, along with improving the well-being of the Pasifika and immigrant community in Australia. She is also a member of the Pasifika Young Peoples Wellbeing Network (PYPWN).

Ekamowir Omo from Nauru!
Strongly embracing her faith and cultural traditions, Caress Detenamo enjoys building community network by participating in cultural dance groups from the diverse regions of the Pacific and being a voluntary member at her local parish. Also holding the post as the Vice President through the office of Queensland Nauru Community (QNC). She is also a founding and active member of a Non-Profit Organisation based in Nauru known as Unique-Lee Violence Prevention Foundation (ULVPF) campaigning for Women’s Equality and Domestic Violence.

She is currently working for the national air carrier, Nauru Airlines and studying Vet Nursing. Her personal interest is having her own home-based Beauty salon. Caress is passionate in promoting the different ties and platforms between our cultures and the changing times ahead so young people especially women will be more aware of their participation,contributions and challenges.